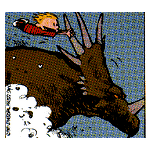 What can I do for you?Edit

Yes, I can help you! If you have any questions or queries, you can (and should!) contact me through my talk page. Among other things:

I live in New Jersey. In order to properly answer this question further, we must delve into a variety of different subjects and what my connection with them is.

Paleontology is my thing. If it wasn't, you wouldn't be reading this page and this wiki would never have existed. My goal is to make an academic career out of paleontology, and the journey down that road is starting to take shape. This is at once both gleeful and terribly frightening. Thankfully, I live not too far away from not one,[2] but two[3] of the only universities on the East Coast that offers paleontology classes/majors to any serious extent. So that's pretty rad.

So far I have collected fossils in the following geological formations:

Likewise, I have a large fossil collection, consisting of examples both hand-collected and bought. Some highlights include:

And there's only one place in the world, as far as I know, where you can receive a museum-quality cast of a Dryptosaurus claw - and I've been there.[4] They keep them in a jar on a shelf, which is pretty sweet.

In addition, I also have a sizable collection of minerals and gems. They're not as exciting as fossils, methinks.

I've had the pleasure of meeting several notable paleontologists and paleoartists:

Herpetology is also my thing. More specifically, herpetoculture, which is like keeping dogs but with reptiles and amphibians instead. To this day I keep both reptiles and amphibians, and love every second of it. Maybe it was my early facsination with dinosaurs that got me interested in their modern scaly lookalikes. Either way, these things are pretty sweet.

I spend way much more time on this place than is probably worth it.

You've probably heard of this site called Wikia. You're on it right now. I started editing on Wikia in October 2010 (roughly a month before I created this wiki, in fact), and I've been editing it ever since.

Just to give you a scale of how involved I am with Wikia, both currently, and in the past, I'll give you some statistics. I have administrator privileges on over a dozen wikis, bureaucrat rights on about a half-dozen, founder status on four or five, and have edited with some regularity on well over fifty. These numbers are all approximate because it's absolutely impossible to keep track. I am inactive on a large majority of these now, simply because fifty-some wikis is a lot to keep track of and in the grand scale of things probably not worth it. Here are some larger wikis I am currently affiliated with:

Besides Wikia, I'm also a member of Wikipedia, Jurassic Park Legacy Forums, The Fossil Forum, some Zoo Tycoon forums I can't recall the names of, the SCP Foundation (occasionally), the comments inhabitants of Doctor Who TV, FanFiction.net and FictionPress.net, and probably other places I've forgotten about. In fact I seem to have a distinct or at least noticeable presence on the Internet if you look in the right places, which is both mildly satisfying and extremely worrying.

Anyway, you've heard me rant enough now, I've just been typing and typing and I need to get back to work on T. rex. You'd never think T. rex gets old, but it actually does. Wow.

So what's my current project?Edit

Also, if you really want to, you can see my to-do list.

Retrieved from "https://prehistoricearth.fandom.com/wiki/User:Styracosaurus_Rider?oldid=7102"
Community content is available under CC-BY-SA unless otherwise noted.