Stegosaurus ("roof lizard"[1]) is a stegosaurid dinosaur from the Jurassic Period of North America. It is one of the most recognizable and well-known prehistoric animals.

Stegosaurus was the largest of its family, measuring up to 9 meters in length and 3 meters in height.[2] Despite this large size, its tiny head was only held around a meter above the ground.[3]

In fact, its head was small enough that it had a braincase no larger than that of a dog's. This contributed to the now outdated idea that all dinosaurs had primitive intellects.[4] Stegosaurus's head also possessed inset teeth, suggesting the animal had cheeks.[5]

The most distinguishing feature of Stegosaurus was its double row of kite-shaped plates along its back and the two pairs of spikes on the sides of its tail. Exactly how these structures were arranged and used is a subject of debate (see Plates and Thagomizer, below).

Stegosaurus was the first genus of the Stegosauridae that was named, and gives its name to the entire family. Four species of Stegosaurus are considered valid today, although others have been described in the past.[6]

The following cladogram shows the position of Stegosaurus within Thyreophora according to a 2010 paper by Susannah Maidment:[7]

Stegosaurus was first described by Othniel Charles Marsh in 1877 from the Morrison Formation of Colorado, and named the type species S. armatus.[8] He first believed that the bones belonged to a giant aquatic turtle, and that the plates laid flat on its back much like roof tiles (hence the literal meaning of the name Stegosaurus, "roof lizard").

S. stenops is the best known species of Stegosaurus, described by Marsh in 1887.[9] It is known from at least 50 skeletons, some of which are complete.

Stegosaurus fossils have been recovered from the Morrison Formation of Colorado, Wyoming, and Utah.[8] During the Jurassic, the Morrison Formation had distinct wet and dry seasons, and was covered in many different types of vegetations. Many other dinosaurs shared its habitat, including the theropods Allosaurus, Torvosaurus, Ceratosaurus, and Ornitholestes; the sauropods Apatosaurus, Brachiosaurus, and Diplodocus, and the ornithopods Camptosaurus and Dryosaurus.[10]

Stegosaurus had 17 dermal plates, measuring up to 60 centimeters in height. How these plates were arranged was a topic of discussion for many years.[11] At first, Marsh thought they laid flat on the animal's back, but he later changed his mind and suggested they formed a single, upright row.[12] Others suggested that the plates were positioned in a double row along the back, although two identical plates have never been found. It wasn't until an articulated specimen of S. stenops was found with the plates still positioned on its back, the way it would have looked in life. It was revealed that they were positioned in two alternating rows along the back.

The function of these plates is less certain. They were initially believed to be a form of armor,[13], but they are too fragile and not properly placed for strictly defensive purposes. Thermoregulatory and display functions have been proposed, and the most commonly accepted theory today is that the plates were used as a form of identification or to attract mates.[14]

Stegosaurus had 4 long spikes on its tail, each about 60 to 90 centimeters in length. These spikes were held horizontally along the sides of the tail (not vertically as often shown) and were likely used to protect the animal against predators such as Allosaurus. Indeed, there are bones of Allosaurus that preserve wounds inflicted by a Stegosaurus tail spike.[15]

After Stegosaurus was described, Marsh noticed a large space in the part of the spinal cord near the hip, and thought it was perhaps filled with clusters of nerves or ganglia. This observation led to the popular public perception that Stegosaurus (and sometimes other dinosaurs) had two brains: the extremely small one in the skull, and a larger one contained in the hip region. However, no knwon animal possesses two brains, and it has recently been argued that this canal actually held a glycogen body, which is an oval structure found in birds that supplies glycogen to the animal's nervous system.[16][17]

Stegosaurus and other stegosaurs were herbivores, but could not move their jaws to the side like other ornithischians in order to chew.[8] There is currently no evidence that stegosaurs used gastroliths, so how they could obtain enough food is not yet completely understood.[5] It could have eaten such plants as mosses, ferns, horsetails, cycads and conifers or perhaps fruits.[18]

A study performed in 2010 suggested that Stegosaurus primarily fed on smaller branches, twigs, and small pieces of foliage, because anything larger would have been more difficult for the animal to bite into.[19]

Stegosaurus is one of the most recognizable dinosaurs,[5] and has appeared in many forms of media. S. armatus became the state dinosaur of Colorado in 1982.[20]

An old drawing of Stegosaurus, showing the plates as they were once thought to be: flat on its back 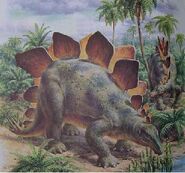 A more accurate drawing showing the plates as vertical

The Stegosauruses in The Lost World: Jurassic Park

The Stegosaurus in Walking with Dinosaurs

The Stegosaurus in Fantasia

Community content is available under CC-BY-SA unless otherwise noted.
Advertisement