Allosaurus is a theropod dinosaur from the Late Jurassic of North America. It is a famous Jurassic theropod.

Allosaurus grew to a maximum of nearly 10 meters long[1], making it the largest carnivore of its time. Its skull had two small crests on its head. It was an advanced theropod for its time. It had long, three-fingered grasping hands, with large, curved claws. It was quite fast, and its tail was used as a counterbalance to the massive head, which was about a metre long. The jaws were filled with razor-sharp teeth.

﻿Allosaurus was a carnivore, and would have fed on Jurassic animals like Dryosaurus, Stegosaurus, Diplodocus and possibly Brachiosaurus. To take down sauropods, it would have hunted in packs.[2]

﻿Allosaurus has starred in many movies and documentaries, including the documentary series Jurassic Fight Club, in which it had a prominent role and appeared in three episodes. It also appeared in the second episode of Walking with Dinosaurs, and almost killed the main 'protagonist', a female Diplodocus. A BBC special called the Ballad of Big Al starred an Allosaurus named Big Al as the main protagonist. 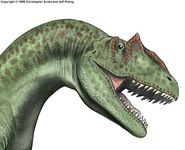 Allosaurus loses a fight against Stegosaurus

Allosaurus in Walking with Dinosaurs

Community content is available under CC-BY-SA unless otherwise noted.
Advertisement